History of Fishguard and Goodwick 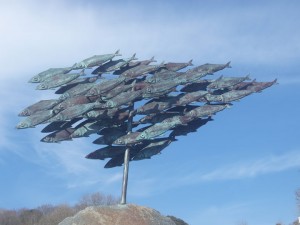 During the middle ages, Lower Fishguard developed as a herring fishing port, trading with Liverpool, Bristol and Ireland, with fish being sorted at the warehouse now used and owned by Fishguard Sea Cadets. With 50 vessels registered, it is claimed that there were so many herring being landed in Fishguard, that the fish were spread across the fields of West Wales as a form of fertiliser.

In 1779 pirateer Black Prince held the town to ransom for £1000 which was not paid which led to an attack on Fishguard. This in turn led to the building of Fishguard fort on the cliff at Lower Fishguard, which is still there today. 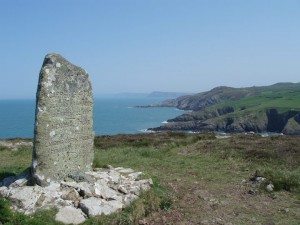 Fishguard and the Last Invasion. 1797 saw the last invasion of Britain when the French landed at Carreg Wasted Point, to the west of Fishguard. Britain and France had been at war since 1793 and 1400 French soldiers landed in West Wales. Their target was Fishguard. The Cannon situated at Fishguard Fort fired a blank, as they had no live rounds and consequently they landed at Carreg Wasted instead of Fishguard. The French surrendered 2 days later when confronted by Welsh Ladies from Fishguard marching against them, led by Jemima Nicholas. The Ladies were dressed in traditional Welsh costumes, which were similar in colour to the soldiers uniforms, so the French assumed they were Cavalry. Jemima Nicholas is credited with single handedly rounding up twelve soldiers, before the French later surrendered and signed a peace treaty in the Royal Oak on Fishguard Square. 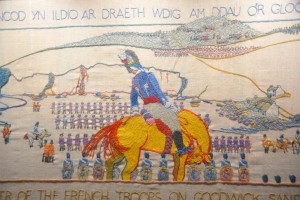 Last Invasion Tapestry. Fishguard Town Hall is home to the Last Invasion Tapestry which was made to celebrate the bi-centenary of the invasion and entry is free. The tapestry is 30 metres long and over 70 local women stitched for two years to make the finished work using 97 different colours of embroidery thread. There is an audio visual room which shows the making of the tapestry. Free admission. 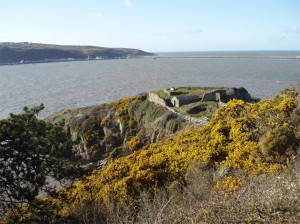 Goodwick and Fishguard Harbour. Goodwicks name is thought to come from a combination of the old Norse forms: goor (good) and vik (bay or cove) giving goorvik. The welsh name is Wdig.

In 1900 Goodwick was once just a cluster of small fisherman’s cottages and at this time work started on building the Fishguard Harbour. Harbour Village was built to house those working on the harbour and Goodwick grew rapidly. Completed in 1906, Fishguard and West Wales was visited by the largest ship in the world at the time the RMS Mauretania.

It is said that Fishguard Harbour could have become the main transatlantic port instead of Liverpool or Southampton but due to regular silting up of the harbour it wasn’t to be. There is a story that the breakwater was deliberately built this way as locals didn’t want the harbour to become too large. The person responsible for the construction of the Fishguard Breakwater was said to have felt guilty following it’s completion and committed suicide of the end of it!

These days Fishguard Harbour provides the shortest route to Ireland, with a ferry twice a day to Rosslare. 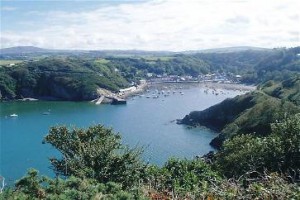 Fishguard on Film. In 1972 Lower Fishguard was the scene for the filming of Dylan Thomas’ Under Milk Wood, with Elizabeth Taylor and Richard Burton drinking at the Ship Inn Lower Fishguard, West Wales It was also visited by Gregory Peck for the filming of Moby Dick. Other films shot locally include ‘I’ll Sleep When I’m Dead’, filmed in Fishguard and more recently ‘The Devil’s Bridge’ was partly filmed in Goodwick.